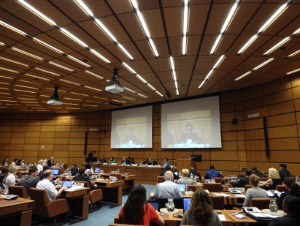 Considering the importance of the corruption issue and the strong public demand around the world to see it addressed, it is perhaps surprising that UNCAC gathering are such low-key affairs compared with the high profile summits that are keeping governments busy this year[1]. This is possibly because UNCAC meetings are quite process-oriented and technical. Some of those involved see the low profile as having the benefit of reducing the level of politicisation and increasing the possibility of progress.

However, UNCAC discussions can get quite polarized, especially when it comes to discussions of transparency and the role of civil society in the UNCAC review process. . This article gives an update on what happened at the UNCAC Implementation Review Group session and briefing for NGOs in June.

This year is a significant one for UNCAC, with the 6th session of the UNCAC Conference of States Parties (COSP) due to take place in St. Petersburg, 2-6 November 2015. The COSP holds sessions every two years and the upcoming meeting will decide on next steps for the UNCAC review process as it nears the end of its first five-year review cycle. Over 90 country reviews have been completed (not all are online) covering the UNCAC chapters on criminalisation, enforcement and international cooperation and more are expected to be finished by the time the 6th COSP meets in November.

Negotiations in preparation for the COSP started at the meeting of the intergovernmental UNCAC Implementation Review Group (IRG) at the UN in Vienna in June. The IRG is a part of the UNCAC Review Mechanism and is tasked with overseeing the progress of reviews and making recommendations to the COSP. It is composed of representatives of all States Parties and has met twice annually since it started work in June 2010. Civil society organisations have thus far been excluded from attending its meetings as observers due to ongoing opposition from a small but influential group of countries. Surprisingly, at the IRG’s latest meeting, the Africa Group publicly joined the group opposing civil society observer status in all COSP subsidiary bodies. For an insight into UNCAC COSP negotiations see the interesting 2012 article by Matti Joutsen and Adam Graycar.[2]

At the IRG’s session on 1–5 June there were no draft resolutions circulating; those are expected to appear at UNCAC meetings in September. The UNCAC Coalition and Transparency International[3] made written submissions for the consideration of States Parties that can be found on the UNODC and UNCAC Coalition websites.

Based on the official report and Coalition conversations with country delegations, the issues discussed at the IRG meeting included the following:

For the last four years, the IRG has held a briefing for NGOs on the margins of the IRG meeting and the latest one was held on 4 June. This is the result of a compromise reached at the Marrakech COSP in 2011, when UNCAC States Parties held negotiations about their disagreement regarding the admission of CSOs as observers in IRG sessions. Supporters of CSO participation decided to accept a temporary compromise in Resolution 4/6 which called for the IRG to provide a briefing for NGOs on the margins of its meetings, to build trust.

The agenda for the latest all-day IRG briefing on 4 June can be found on the UNCAC Coalition website page dedicated to the 6th IRG. The briefing was quite well attended by country delegates during the morning session, with 85 delegates from 49 countries. Attendance fell off in the afternoon. The UNODC report on the briefing can be found on the UNODC website page on the 6th IRG.

In practice, most of what CSOs learn during these briefings can be captured from the documents for the IRG session on the UNODC website. However, the briefing also gives CSOs the opportunity to present recommendations, describe best practices and relate experiences supporting UNCAC implementation and review, though subject to a paradoxical rule that CSO representatives should not discuss specific country situations. A possible alternative to the full-day of CSO-organised panel discussions at the IRG briefing would be to hold lunchtime panel discussions during the entire week of the IRG session, which could also serve to promote constructive dialogue between delegations and civil society representatives.

The latest IRG briefing for NGOs began with a one-hour briefing by UNODC, followed by statements from several Coalition members. There were then three panels organised by the Coalition.

One of the panels presented proposals about the UNCAC review mechanism from:

You can find both these presentations on the UNCAC Coalition website in the section on the 6th IRG. They propose, inter alia, that the 6th COSP should establish a formal follow-up process to the 1st review cycle and an effective, well-resourced 2nd review cycle covering both prevention and asset recovery.

There were two further panels on priority anti-corruption topics, with proposals for the consideration of States Parties:

You can find the panel presentations on the UNCAC Coalition website in the section on the 6th IRG.

Negotiations ahead of the COSP are expected to resume at the meetings of the UNCAC Working Groups on Prevention and Asset Recovery in Vienna in September. It is to be hoped that after a slow start, preparations for the 6th COSP will pick up steam, that solutions will be found to process issues, and attention will be given to collective action on priority implementation issues. States Parties are invited to give consideration to the written and oral statements from the UNCAC Coalition and Transparency International and from other civil society representatives submitted to the IRG briefing for NGOs in June. Civil society organisation continue to call for greater transparency and CSO participation in the UNCAC review process, including CSO participation in UNCAC COSP subsidiary bodies such as the IRG and Working Groups.