The Conference of States Parties (COSP) is the main decision-making body of the UN Convention against Corruption (UNCAC).

The COSP meets every two years and adopts resolutions and decisions aimed at building states parties’ capacity and cooperation to achieve the convention’s objectives as well as promoting and reviewing its implementation. It operates under Rules of Procedure adopted by the Conference.

The Conference of States Parties (COSP) has created subsidiary bodies, operating under its mandate, to help it in its work. To date they have all been “open-ended intergovernmental groups” made up of representatives of all states parties, with no fixed members. They are meant to advise the COSP and provide recommendations to help deliver its mandate. Their reports, using resolution style language, call on states to take certain actions or request UNODC to carry out specific work.

What can civil society organisations (CSOs) do at COSP sessions? 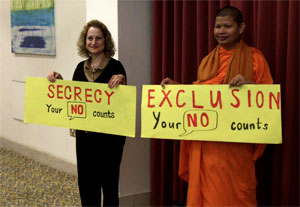 What is the UNCAC? What happens at an UNCAC Conference of States Parties? Why is it important for CSOs to be there? What actions does the UNCAC Coalition undertake? Why do anti-corruption activists need protection? The 4 short video segments produced by Transparency International aim to provide some answers.

The videos from Scenes from a Global Anti-Corruption Summit range from 4 to 9 minutes long and consist of:

Your feedback would be welcome! Also, help spread the word by linking to or embedding this video series on your web pages and sharing them via online communities.