Beneficial ownership transparency (BOT) is an essential means for combating corruption and money laundering. It is emerging as a major strategy in tracking illicit financial flows and tax evasion. It aims to prevent companies’ owners from operating in secrecy. It prevents hiding behind anonymous companies. Therefore, CSOs working against corruption are advocating for the setting up of registers to allow authorities to improve transparency in beneficial ownership.

The UNCAC Coalition’s seventh regional meeting of the Asia-Pacific groups and individuals took place on the 11th July, featuring discussions on beneficial ownership transparency (BOT). The meeting gathered 20 participants including representatives from all over the region, Asia-Pacific members of the Coalition Coordination Committee (CCC), and colleagues from the Coalition’s Vienna Hub. The Regional Coordinator for Asia-Pacific, Fatema Afroz, opened the meeting, presenting the speakers from New Zealand, Taiwan and Malaysia. Presentations on BOT were followed by a lively discussion with an exchange of information, queries, ideas, and activities.

The meeting was kicked off with a few updates from Vienna. Denyse Degiorgio, Project Officer at the Vienna Hub, delivered messages about the UNCAC Coalition’s recent activities in UNCAC fora. In the 13th session of the Implementation Review Group (IRG) the Coalition co-organized side events, one of which focused on Beneficial Ownership Transparency. The panels brought together a series of speakers representing different views from government as well as civil society experts. The UNCAC Coalition Review Status Tracker was also promoted as a tool with information on the UNCAC 2nd cycle review status in countries around the world, condensing two years of advocacy and outreach work by the Coalition to learn more about the status of the UNCAC review.

Adam Hunt, Board Director and Julie Haggie, Executive Director of Transparency International New Zealand, presented the progress taking place on BOT in New Zealand. The actions were prompted by a consultation on BOT and review by the FATF that highlighted a lack of transparency in beneficial ownership information as the key deficiency in AML/CFT framework. This made BOT a top priority. It was decided to introduce a new beneficial ownership register for limited partnerships and companies and to create a unique identifier for directors of companies, general directors of companies, general partners of limited partnerships, and beneficial owners of these entities. They also proposed for a modified definition of “beneficial owner” to focus on persons who have “significant control” over a company or limited partnership, and who have the right to exercise or actually exercise, significant influence or control over the activities of a trust. However, the companies and limited partnerships will be expected to take reasonable steps to ascertain who their beneficial owners are and provide key identifying information about the beneficial owner to the Registrar. The shareholders and the partners have obligations to ascertain whether they are a beneficial owner, to inform and provide all relevant information to their respective entities. Where there is a black letter law that prohibits unique identifiers being used except without exceptions, the New Zealand cabinet’s decision to establish a unique ‘corporate role-holder identifier’ is being regarded as a significant step forward.

A Bumpy Journey to BOT in Taiwan

Kevin Yeh, the Executive Director of Transparency International Taiwan presented national experiences in Beneficial Ownership Transparency. Kevin started with mentioning BOT as one of the major strategic areas in their fight against corruption. High-profile cases, such as the Lafayette Frigate Scandal and a scandal involving the  Former First Lady, showed significant cross-border financial flows and a lack of investigation and enforcement. Two milestones paved the way for reform: the Asia-Pacific Group’s follow-up on Money Laundering (APG) in 2018, which underscored the effectiveness of government efforts in implementing globally recognized controls and initiatives; and the independent review of the implementation of the UNCAC in August 2018. Wide-ranging reforms in place since early 2017 have resulted in significant progress. TI Taiwan considers these to reflect the strong political commitment to AML/CFT reform, effective coordination and efforts to strengthen and deepen the culture of risk management. The review of the implementation of the UNCAC recommended two measures, including preventive measures focusing on the public sector to meet the growing threat of private sector corruption; and strengthening the fight against money laundering and to recover the proceeds of crime. 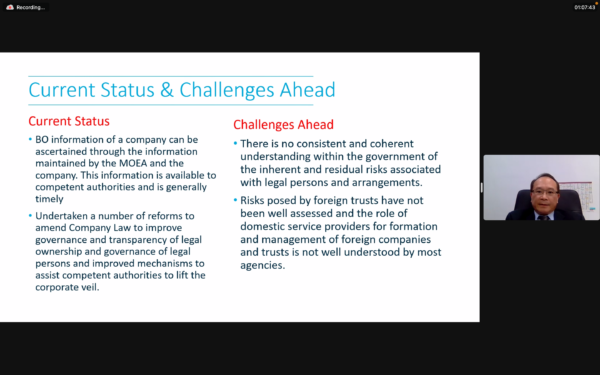 It is encouraging that Taiwan is currently taking the initiative to amend the Company Act, in order to regulate and identify the beneficial ownership of companies and the issuing of bearer shares, as well as implementing new rules (announced in 2016) for the confiscation of proceeds of crime and for improving the management system for frozen and confiscated property. However, they are also being encouraged to consider prohibiting nominee shares and directors, or to provide other mechanisms to ensure they are not misused for money laundering purposes. Kevin concluded by presenting some of challenges in Taiwan such as: a lack of consistent and coherent understanding within the government of the inherent and residual risks associated with legal persons and arrangements; the risks posed by foreign trusts have not been well assessed; and the role of domestic service providers for information and management of foreign companies and trusts is not well understood by most agencies.

A company, through its Board of Directors, has the statutory right under Section 56 of the Malaysian Companies Act 2016 to inquire from a registered shareholder whether he/she is holding the shares as beneficial owner or as “trustee” for another person who is the beneficial owner. However, there are some changes in law that includes the Companies Commission of Malaysia (CCM), which is spearheading the law reform to make BO declarations automatic and mandatory. Currently in a transition phase, CCM has issued guidelines to direct all companies to use Section 56 to inquire from all its shareholders whether there is any BO for the shares being held. There is a push to make the BO register only available to law enforcement agencies. Meanwhile civil society organizations are pushing to have the BO register publicly accessible.

Open Discussion and Exchange of Views

The presentations were followed by a lively discussion drawing similarities between Taiwan and Malaysia, and reflecting on how we can track the owners crossing borders and nations, committing the same corruption crimes in different countries and getting away with it, but we may now have better tools to deal with this. One such way is by making company register more transparent. Participants also discussed the benefits of information sharing and pooling expertise on best practices.

One of the important takeaways from the meeting was that while countries differ in their prioritization of BOT, CSOs in different countries can work together, connecting the dots to share relevant information. The meeting concluded with an invitation to continue sharing information and ideas among CSOs and individuals across the region.

If you are a civil society activist from Asia-Pacific and would like to become involved, please contact our Regional Coordinator Fatema Afroz at email hidden; JavaScript is required.