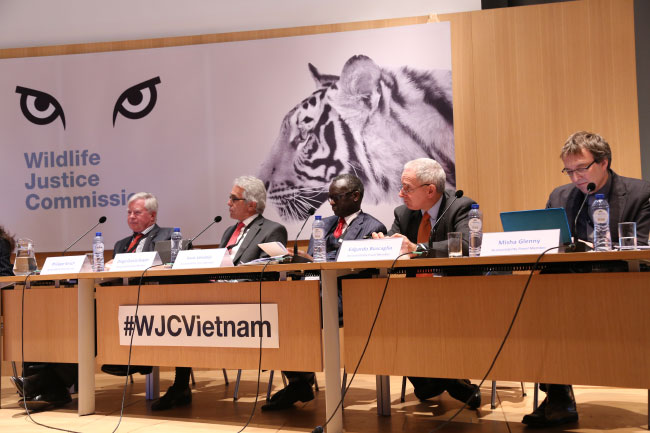 Wildlife crime is the fourth largest illegal trade in the world, trailing only behind drug trafficking, human trafficking and counterfeiting in generating revenues for transnational criminal networks: some estimate it generates around 20 billion euros a year.

There are sufficient legal regimes in place, including laws covering wildlife and related crimes, such as tax evasion, money laundering and corruption, to which most states are parties. And yet, an elephant continues to be killed every 15 minutes and a rhino every eight hours, causing the risk of imminent extinction to these and other species.

The Wildlife Justice Commission was recently established to bring a new approach to the work of conservation organisations trying to stop these crimes before it is too late – a legal approach. We conduct intelligence-led investigations and provide the relevant governments with evidence of violations of their laws related to wildlife, tax, corruption or other issues.

In November 2016, an independent Accountability Panel, consisting of esteemed international judges, scholars and journalists, confirmed the findings of our year-long investigation into the wildlife trafficking hub, Nhi Khe, in Vietnam. In doing so, it found that immediate action was required and reminded the Vietnamese government to fulfil its obligations under the relevant international conventions, including the UN Convention against Corruption (UNCAC).

The findings from the Wildlife Justice Commission had been presented to the Vietnamese authorities in January 2016, along with supplementary information, after on-going monitoring, in August 2016. However, despite extensive diplomatic efforts, very little action was taken, with only one known recent arrest as a consequence of the findings presented.

The Panel’s recommendations followed a two-day Public Hearing,[1] during which it was presented with findings on 51 individuals, including undercover footage, financial flows and bank accounts, operating transnationally and with impunity, and trading in rhino, elephant, tiger and other endangered species via both shops and social media.

One specific recommendation was to all parties to the CITES, UNCAC and UNTOC: To take appropriate measures in support of Vietnam in order to combat and prevent transnational organised wildlife crime, in compliance with their obligations under these conventions. The inclusion of other international legal norms in the fight against wildlife crime is essential, and the Wildlife Justice Commission will seek to assist in the implementation of these norms.

We continue to try and work with the Vietnamese authorities and other stakeholders to assist and encourage them to live up to their obligations under international and national law. A key mechanism for monitoring the Vietnamese government’s implementation of the Panel’s recommendations will be the establishment of a civil society board, which the Wildlife Justice Commission would lead. It will be important to involve experts on corruption as well as wildlife crime and those who have insight into activities on the ground. We will continue to monitor this case and work with others to ensure concrete action on this serious crime.

Olivia Swaak-Goldman is Executive Director of the Wildlife Justice Commission.