Home > News > Third Regional Meeting for Latin America: Access to Public Information as an Anti-Corruption Tool and a Right to Protect

Access to information, both as an anti-corruption tool and a human right, is a topic that civil society organizations in Latin America are very familiar with. This made for a very well informed and passionate Third Regional Meeting for members and affiliates of the UNCAC Coalition from Latin America on 14 September 2021. Speakers from Panama, Bolivia and Paraguay, as well as almost 30 other participants from the region, shared their experiences using access to public information in their organization’s activities and the challenges they encountered when trying to obtain information. 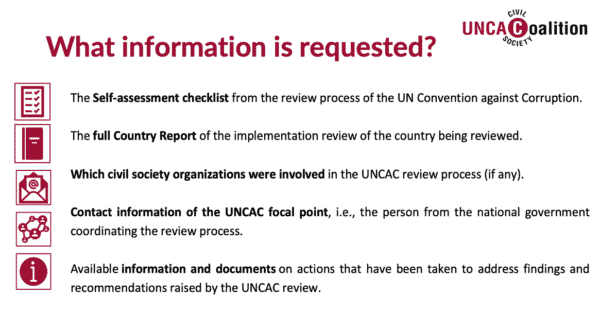 Project Manager Danella Newman presented the UNCAC Coalition’s ongoing Access to Information campaign. With the support of CSOs around the world, we aim to use access to information legislation or the UNCAC itself to obtain more information about the UNCAC review process and its key documents which are often kept secret. The UNCAC Coalition has created a request template for CSOs to use, and will track how quickly governments respond, if at all, and how complete the information given is. If you are interested in joining this campaign, please write to us at email hidden; JavaScript is required.

The following are summaries of the presentations held by the three speakers: 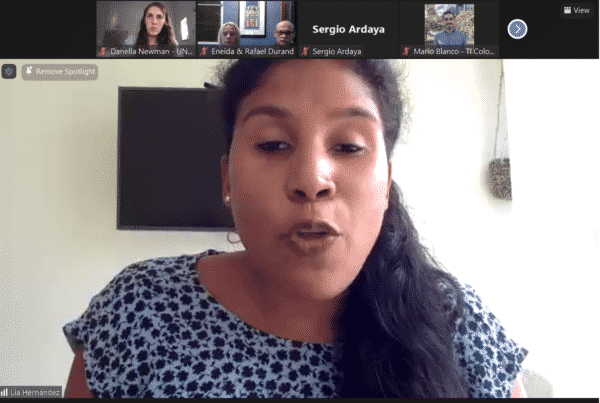 Lia Hernández, Executive Director of Coalition member organization Instituto Panameño de Derecho y Nuevas Tecnologías (IPANDETEC), gave a brief account of her organizations’ experiences working on access to public information in Central America, with particular emphasis on Panama, the country with the oldest access to information law in the region. IPANDETEC works in the region organizing Hackathons, supporting other civil society organizations with technical support for creating data portals, and organizing fact-checking campaigns, all with thorough use of access to information systems.

Lia finished her presentation by noting that IPANDETEC’s work has caused some blowback: the organization and its members had their social media accounts blocked after criticizing the ATI Ombudsperson’s performance. The case made it to the Supreme Court which gave merit to the official’s complaint, stating that IPANDETEC had not indicated their legal name and status as a civil society organization on the court documents, and thus the blocking of their accounts did not break freedom of expression laws. Lia concluded by saying that the situation shows that her organization is doing things right by shaking up the status quo. 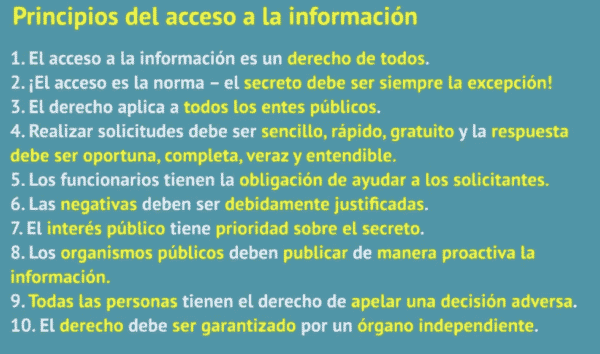 Sergio noted that most FUNDEPCO’s work focuses on helping organizations and journalists obtain information which they should be able to access without going through the courts. Many of the requests they help push through the court end up positively affecting investigations of or uncovering corruption. Sergio believes that International Law, specifically the UNCAC and the Sustainable Development Goals (SDGs), as well as established national legal doctrine are a solid basis for obtaining information, but that without a  national law on the matter, citizens will never internalize that they have a right to access information and that the state has a duty provide it to them.

The last speaker, David Riveros García from reAcción Paraguay, spoke about his organization’s experience mobilizing youth in access to information and anti-corruption campaigns. Based in Ciudad del Este, one of the region’s most notorious focal points for cross-border crime and corruption, reAcción seeks to be a watchdog for local and national integrity interests. The organization is youth-focused, with the average age of its staff being 23 years old, and works primarily on education and corruption, as corruption is a prime concern for young people, with a strong emphasis on communicating the results of their work in an appealing way. They have participated in several fora, including a government-promoted hackathon regarding medical supplies and in the Paraguayan Civil Society Open Data initiative, where they focused on getting young people to participate.

Finally, David talked about reAcción and IDEA Paraguay’s initiative to request public information on asset declarations of public officials. The request, though originally denied, was ultimately granted by a higher court. More than 20 years of asset declarations were disclosed, leading to judicial indictments and resignations by several high-level officials.

The speakers prompted a conversation about how to move forward as a group of organizations spread across the region. One participant noted that the pandemic has brought about an “info-demic”, as many governments began to refuse information disclosure on the grounds that the pandemic was more of a priority for state attention. She noted that in Mexico this situation has not let up, and asked other participants what they had done to overcome these barriers. She noted the need to better communicate within the region, in order to promote cross country support for civil society actions. Other participants seconded this call, proposing the creation of a repository of campaigns, legal doctrine and best practices that UNCAC Coalition members had developed in order to better learn from each other.

If you are a civil society activist from Latin America or the Caribbean and would like to become involved, please contact our Regional Coordinator Iñaki Albisu Ardigó at email hidden; JavaScript is required.