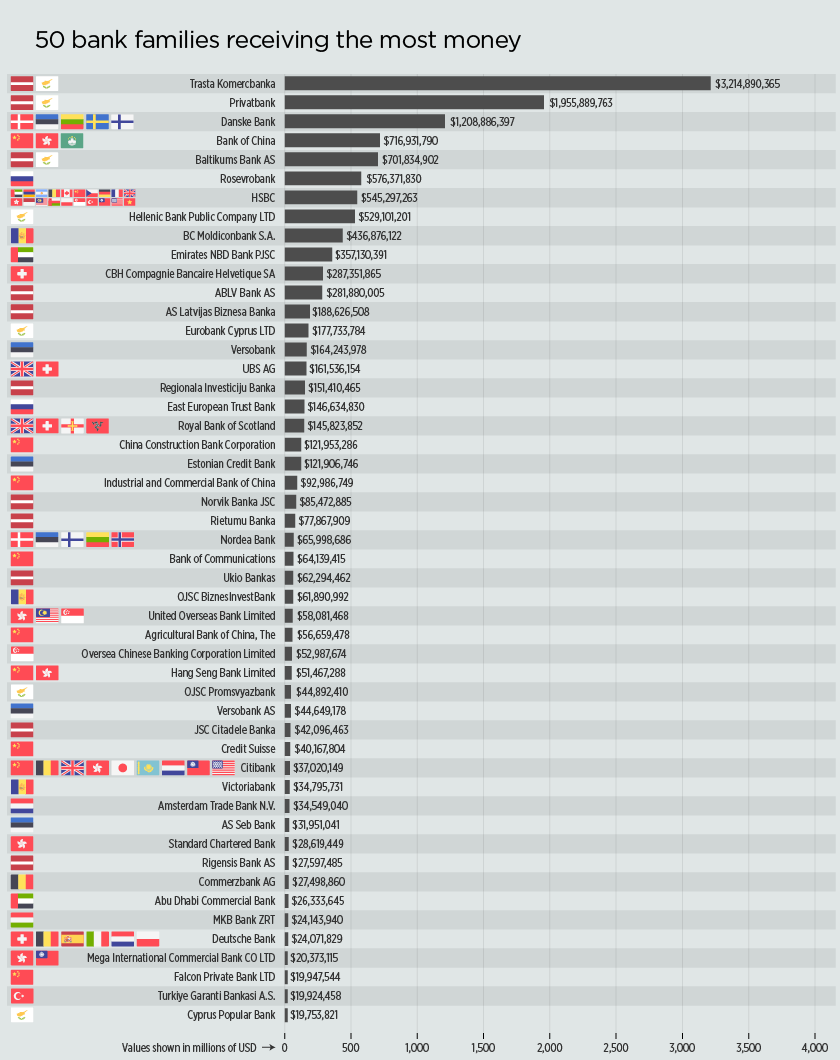 Three years ago, the Organized Crime and Corruption Reporting Project (OCCRP) exposed the “Russian Laundromat” – an immense financial fraud scheme that enabled vast sums to be pumped out of Russia. The money, totalling more than US$20 billion, was laundered and moved into Europe and beyond through bribery and a clever exploitation of the legal and banking systems in the Republic of Moldova and Latvia.

After this initial exposé, a number of countries started their own official investigations including Russia, Moldova, the United Kingdom and others. But, as the evidence started piling up so did the frustration among law enforcement agencies, which could not secure Russia’s full cooperation in probing the fraud. This is the main reason why documents detailing more than 75,000 bank transfers were handed to OCCRP and Novaya Gazeta. OCCRP assembled a team of reporters from 32 countries on three continents to track down the money and produce “The Russian Laundromat Exposed” investigative series.

While prosecutors file their requests under very slow mutual legal assistance treaties, skilled criminals destroy evidence and move on to their next global fraudulent schemes. Although global in scope and reach, organised crime groups hate globalisation to the extent that it means harmonisation of legislation and cross-border cooperation in law enforcement. They see from above and cleverly use the labyrinthine nature of national laws and toothless global treaties.

But the global Laundromats are not just law enforcement problems. OCCRP and partners focused attention on the world’s banking system, as some of the largest international banks received the Russian Laundromat’s billions without ever questioning the origin of the money. The evidence of the crime was, in fact, right under their noses: British companies with no real beneficial owners were sending in millions of dollars every day.

It would have taken the compliance departments of these financial institutions only a few clicks in public databases to find that on paper these companies were owned by poor people from Moldova, Ukraine, Russia or other countries. These people were just proxies who, unknowingly, fronted for the criminals, but banks have not bothered to follow proper know-your-customer procedures.

For now, the only enemies of the organised crime networks at the global level are teams of investigative reporters who cooperate across frontiers and expose wrongdoing. There’s need for more. It’s high time for both the international banks and law enforcement agencies to clean up their acts and to exchange information on money laundering patterns in order to stop criminals from doing business as usual. When government experts meet in Vienna for key UNCAC-related anti-corruption meetings in June and November this year, this should be at the top of their agenda.

Paul Radu (@IDashboard) is the executive director of the Organized Crime and Corruption Reporting Project and a co-creator of the Investigative Dashboard concept, of visual investigative scenarios visualisation software and a co-founder of the RISE Project a platform for investigative reporters and hackers in Romania.