Home > Blog > The Tipping Point: Enough is Enough in Cameroon 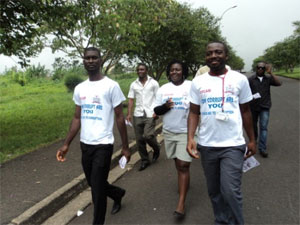 FITCAM mobilises University students for a corrupt free university match tagged ‘How Corrupt are You’ with the distribution of over 10,000 anti-corruption flyers

The impact of civil society activities in Cameroon is getting to its ‘tipping point’ as CSOs’ efforts to hold public officials to account can no longer be ignored.

The war against corruption in Cameroon has reached a point where emerging groups of civil society are beginning to add their voices in denunciations and actions that sends the ‘enough is enough’ message to corrupt government agents. Each year civil society accounts for more than 1000 corruption denunciations received by the independent, national anti-corruption commission, exposing corrupt practices and corrupt officials. Since the establishment of a national anti-corruption coalition of civil society organisations (CSOs) against corruption, more knowledge about -fraud, corruption and abuse of power is being exposed to the public. This enables communities and law enforcement agencies to step in and bring the corrupt to book. Although Cameroon’s political commitment against corruption has been tainted with ‘witch hunting’ and not the rooting out of systemic corrupt practices that have taken the public service hostage, several champions are emerging from within the country. The Minister of Higher Education, together with the executive secretary for the National Anti-Corruption Strategy at the National Anti-Corruption Commission, Vice Chancellors and Regional Delegates have started working together with anti-corruption CSOs to see the momentum against corruption reach a tipping point.

At a time when hope and belief are severely stretched and many ordinary citizens are excluded from the institutions and practice of democracy, anti-corruption CSOs are becoming a beacon of hope to the many who find the system of democracy in Cameroon working for the benefit of the elite or political class. A sustained relationship between civil society organisations and the national anti-corruption agency has been deepened to mobilise and include voices that are being left out of the political process. They aim to contribute to an improvement of participatory governance and effective war against corruption. In analyzing the emerging anti-corruption movement in Cameroon and crafting a way forward, Frank Vogl’s book “Waging War on Corruption” is a good read for the National Anti-Corruption Commission of Cameroon (CONAC) and CSOs. 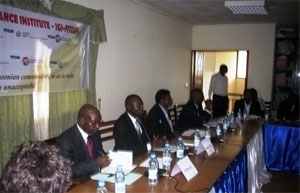 Joint anti-corruption intervention in State Universities in Cameroon: CONAC, FITCAM, Agency for the Regulation of Public Contracts and Elections Cameroon team up!

The transition of the National Anti-Corruption Commission in Cameroon to work with civil society in combating corruption is gradually paying off with the dividends of corrupt officials and their practices being exposed and published for sanctions. The fear of being exposed or caught is shifting perception and forcing attitude adjustments in the public service and amongst greedy elites. The strength of this exploit lies in the heart of an effective partnership between anti-corruption civil society organisations and CONAC. Although this collective effort with civil society in combating corruption in Cameroon is still a learning curve, multiple lessons can be learned from such an exercise. First, there has been a constructive engagement between the various key champions against corruption in both public and private sector institutions, including the CONAC, in building and encouraging a “watch dog mentality” within civil society. Second, it has ensured an effective presence of the Commission in remote areas where most corrupt activities related to infrastructure are perpetrated by contractors and local government officials through the aid of its civil society partners.

As a follow up statement to the 15th International Anti-Corruption Conference Declaration ‘Don’t let them get away with it,’ the Focal Integrity Team for Cameroon (FITCAM) is reiterating that the extent and impunity with which public officials continue to embezzle and misappropriate public funds and resources in Cameroon’s struggling economy, demands a review of Cameroon’s implementation of the UNCAC. CONAC has confirmed this impunity in its latest report in 2012. The agency’s report reveals astonishing levels of corruption in macro projects that are still in their elementary stages, notably the Lom-Pangar Electrification and the Kribi Deepsea port projects. 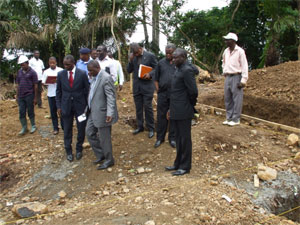 A field monitoring and evaluation of public contracts in rural Cameroon funded under the Public Investment Budget: A project to construct an administrative block for the local government in the West Coast of Cameroon where FITCAM uncovered a 20% kick back corruption fraud during the tender process.

According to the state of corruption report released by CONAC in November 2012, over 2 billion CFAF are said to have leaked out from Lom-Pangar (Electrification) Project in Cameroon as a result of multiple fraud and corrupt practices during the project’s feasibility studies, tender, contract award and follow up processes of its first execution phase. Cameroon is a country which envisages to achieve an emerging country status by 2035 and to accomplish this, the government commits a considerable portion of its resources to infrastructure projects that cost it billions of CFAF. There is no denying that without a deliberate effort to root out the corrupt practices depleting the same resources earmarked for growth and development, Cameroon will hardly transition itself to emerging country status. A second huge project of significance to its emerging status is the Kribi Deep Seaport project. The Kribi deep seaport, like the Lom-Pangar, project is also riddled with corrupt practices concealed in fraudulent compensations and payments to individuals whose properties were never destroyed by the Kribi seaport project. An analysis of the claimants of land titles around the deep seaport project by CONAC reveal that 65 percent of those who have been paid compensations are hardened white collar criminals who do not have property within the deep seaport area. The report confirms that the government has paid out an estimated 500 million to 2 billion CFAF worth of compensation funds.

Corruption from last year alone puts the amount of money embezzled from projects in the billions of CFAF. In their book Why Nations Fail Daron Acemoglu and James A. Robinson explain that politics is the process by which a society chooses the rules that will govern it. If the choice of Cameroon’s governing politics is that of corruption, as seen in TI’s Corruption Perception Index, civil society must step in.

By sustaining and deepening the already existing relationships with anti-corruption reform champions in both the public and private sectors, civil society organisations will be able to triple the gains of collective action against corruption in Cameroon. The 2012 report of CONAC exposing and denouncing corrupt practices in Cameroon may have signalled that the country is at its tipping point in the fight against corruption, but also that it is necessary for the Cameroonian government to introduce an Anti-Corruption Law in conformity with the same international instruments which it has ratified, such as the UN Convention Against Corruption.

Stephen Asek is the country director of the International Governance Institute’s Focal Integrity Team for Cameroon (IGI-FITCAM) and member of the Coalition.