After three years of operation, the UNCAC Implementation Review Mechanism is off to a promising but uneven start. Transparency International has prepared a progress report on the review process, and has prepared recommendations for strengthening reviews, including the following: 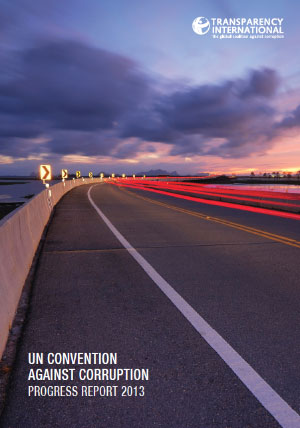 It is impressive that 168 governments have ratified the UNCAC. However, the failure of two crucial G20 governments —- Germany and Japan — to ratify the convention is deplorable and should be overcome promptly.

No follow-up process has been established to address governments’ implementation of recommendations in the country reviews. The fifth COSP should call on governments to prepare action plans to respond to these recommendations. Such action plans should be circulated within six months after the completion of country reviews and submitted to the UN Office on Drugs and Crime (UNODC). Unless the need for prompt follow-up action is addressed, the implementation review process will lose momentum. The action plans should include information on technical assistance required.

It is encouraging that most governments have agreed to country visits by reviewers. Such reviews must become standard practice. The alternative of desk reviews conducted in Vienna is unsatisfactory, particularly for civil society participation.