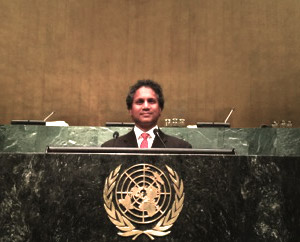 Every year, corruption kills 140 000 children worldwide, by depriving them of medical care, food, and water. Yet, far too often, the perpetrators of the most outrageous acts of corruption are able to use their illicit wealth and power to pervert the very laws and institutions that should call them to account.  As a result, the worst offenders are the least likely to face domestic justice.

In such cases, when national authorities are unwilling or unable to act, the international community has a responsibility to step forward.

In February 2013, seven hundred parliamentarians and observers from across the world came together under the aegis of the Global Organization of Parliamentarians Against Corruption (GOPAC), and voted unanimously to seek to establish “grand corruption” as a crime at international law, to enable international institutions to pursue, apprehend, prosecute, judge, and ultimately sentence the guilty.

Since then, GOPAC has joined hands in this effort with our allied international institutions and with citizen organisations across the world, most notably our partners at the UNCAC Coalition and Transparency International.

Our global alliance believes that there are some forms of corruption so grave, whose effects on human life, human dignity, and human rights are so catastrophic, that they should shock the conscience of the international community and mobilise the will of nations to act across borders.

To give effect to this belief, we are bringing forward four initiatives to the Conference of States Parties to the UN Convention Against Corruption.  Each option has its advantages and its disadvantages, and each strikes a different balance between the ideal and the possible.

The first option is to expand the ability of national courts to assert universal jurisdiction over grand corruption.   The doctrine of universality asserts that some crimes are so egregious that they are an affront to all humanity and are therefore prosecutable by any state, irrespective of where the crime was committed and irrespective of the accused’s nationality or place of residence.  The Spanish courts’ indictment of the Chilean dictator Augusto Pinochet demonstrated universal jurisdiction’s powerful reach; their inability to bring him to trial exposed the doctrine’s frequently feeble grasp.

The second option is to employ existing regional courts in Africa, Europe, and Latin America to prosecute grand corruption.  Regional courts tend to enjoy greater credibility and standing in their subscribing states than do global institutions; they also tend to be derided for a timorous unwillingness to apply the powers at their disposal.

The third option is to argue for an expansive interpretation of the jurisdiction of the existing International Criminal Court (ICC) or for the creation of a new International Anti-Corruption Court, on the grounds that grand corruption is a Crime Against Humanity.  The symbolism of the ICC as a global court of last resort and ultimate justice has captured public imagination; the reality of its resources has never soared to equal heights.

The fourth option is the use of civil actions against kleptocrats, to seize the proceeds of their crimes and restore stolen assets to the nations they have exploited.  Making victims whole is one of the key objectives of any system of justice, but victims are unlikely to feel that justice has been served if their victimisers walk free.

Each option is imperfect, but in an imperfect world, success must be measured not by our ability to attain perfection, but instead by our ability to make tomorrow better than yesterday. The journey will be long; the path will be hard.  But we would never reach the end if we allowed ourselves to be cowed by the start.

The world is littered with women and men who feed on the misery of entire societies, who have grown fat in their spoils and comfortable in their impunity, sheltering behind national jurisdictions and national institutions that they have been able to twist to their benefit.

But there is a higher law.  There is a deeper justice.  And we have a responsibility to stand up for it.

Akaash Maharaj participated in a panel discussion organised by the UNCAC Coalition on Special Measures against Grand Corruption that took place during the 4th UNCAC IRG Briefing for NGOs on 4 June 2015 at the UN in Vienna, Austria. The full agenda, statements, and presentations can be found here.