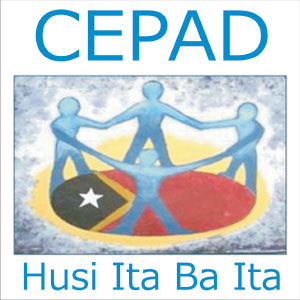 Our Vision is for a Timor-Leste which is free from conflict and where there is transparency, integrity and accountability in the process of national development. Our Mission is that through permanent dialogue, we will increase public knowledge and participation at all levels of society to find ways to achieve peace and sustainable development.

CEPAD was established in 2007 and it has since worked with different donors, programmes, communities and media in identifying and broadening the understanding of the complex challenges to peace utilizing Participatory Action Research (PAR) methodology. The four most pressing issues were identified in CEPAD’s consultations in 2007-2009:

In 2009-2012, National Working Groups were established and formulated broad-based consensus and solutions to address these priorities. In 2012 a permanent civic education campaign was launched nationwide to raise people’s awareness about corruption and reporting mechanisms, in collaboration with anti-corruption state institutions, civil society organizations and media. Thereafter, CEPAD produced a number of policy publications building on its research and contributing to policy deliberations around the four priority topics in the promotion of anti-corruption, good governance and political reform.

Specific description of the CSO work in connection with the UNCAC

CEPAD’s comprehensive anti-corruption civic education campaign promotes good governance by urging the government to comply with anti-corruption conventions through fostering a collaborative framework between key state institutions, media, civil society and the general public. The established Group Promoting Change integrates representatives from the State, Civil Society Organizations, church, lawyers, women groups and academics. Among other tasks, the group provides inputs in revising the draft anti-corruption legislation which was presented to Anti-Corruption Commission (KAK) in February 2015. This was done in the context of aligning anti-corruption activities with UNCAC standards in Timor-Leste. Joint advocacy activities with KAK, the Ombudsman and the General Prosecutor Office have been formalized through signed MOU’s. These collaborative arrangements are to combine synergies and to hold the government to account for their commitments under the UNCAC convention.