Leaders of Brazil, Russia, India and China are gathering in South Africa for a summit this week, where they will undoubtedly congratulate themselves on the high economic growth their nations have achieved. Some items that are notably absent from the agenda: Tax evasion, round-trip foreign transactions, and money-laundering.

Each of the BRICs have big problems with tax dodging, which saps billions from national treasuries and—in the case of Russia, India, and China—suggests the newly rich are failing to share the wealth with the poor, leading to widening income inequality (pdf p.88). (Brazil has issues with tax avoidance by multinationals rather than individuals, about which more below.)

The clearest sign that BRICs are leaking tax revenues is that each country’s biggest source of outside investment is a tax haven. China counts the tiny Caribbean bolthole of the British Virgin Islands as its biggest source of foreign investment (not including the Chinese territory of Hong Kong). India has Mauritius, Russia has Cyprus, and Brazil has the Netherlands.

The explanation for these incongruent flows of cash is that wealthy nationals are sequestering their income offshore to avoid paying tax, and then bringing it home dressed up as foreign investment to disguise the source of the funds. Here’s how it works. 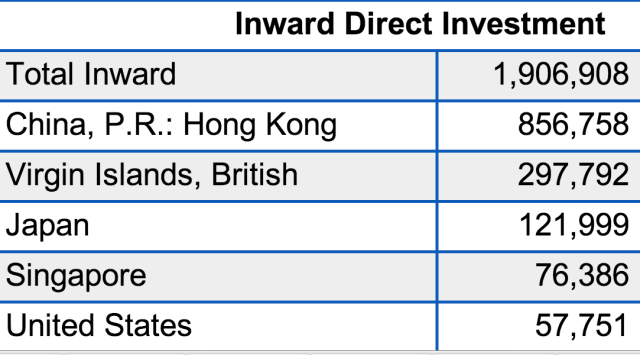 For example, when Chinese tycoons IPO their companies in Hong Kong, they often set up a BVI holding company to collect money from the sale of their shares. The tycoons then re-route that cash back home as a fake foreign direct investment (FDI) in one of their Chinese businesses. That way, they don’t have to pay domestic capital gains tax on the IPO profits. As a bonus, China grants favorable tax concessions on foreign direct investment, so the tycoons benefit twice.

Washington non-profit Global Financial Integrity explains how “illicit outflows” (pdf p.9) from China also re-enter the country as fake FDI from the BVI. This is probably due to a trick known as “mis-invoicing,” where a Chinese exporter sells, for example, $100 million of goods to the US but only reports $50 million to the Chinese tax authorities. The rest sits in a BVI holding company for a while until the exporter brings it home disguised as FDI.

As Quartz already noted, wealthy Indians use Mauritius as a base to stash untaxed wealth offshore before bringing it home as fake FDI. Mauritian investments in India are massive:

Not all of the financial flows from Mauritius to India represent tax evasion by individuals. Hedge funds and multinationals also use Mauritius as a gateway for investing into India, due to a favorable tax treaty between the two nations that grants foreign investors lucrative tax savings. Still, the Indian Finance Ministry has estimated that fake FDI from Mauritius costs India $600 million annually.

As the world now knows, Cyprus is, improbably, Russia’s biggest foreign investor (although probably not for long, if capital controls stay in place).

Similar to the China-BVI round-trip, Russian exporters use Cypriot holding companies to collect profits earned abroad (pdf p.40). Instead of paying tax on those earnings, the companies let the money sit in Cyprus for a while, and then repatriate it, tax free, as FDI.

The Netherlands, which some call the biggest tax haven you never heard of, is Brazil’s largest foreign investor, according to statistics.

It is probable that much of this Dutch investment comes from multinationals using Dutch holding companies to set up businesses in Brazil while paying very little local tax on their Brazilian earnings.

As this presentation from lawyers at international law firm Clifford Chance illustrates, setting up an intermediate Dutch company that appears to own a Brazilian business gives big tax advantages. For example, Dutch companies do not have to pay local taxes on dividends earned from a Brazilian investment.

This structure is known as the “Dutch sandwich” in accounting circles. The name describes how a Netherlands company (think of it as a slice of Edam) is inserted between the real source of investment and the real investment destination (they are the bread).

The absence of other havens on the list of Brazilian investors shows that its rich individuals are more wary of using fake FDI structures than Chinese, Indian or Russian nationals. When it comes to policing tax evasion by individuals, Brazil is a world leader. And when it comes to fighting tax leakage, Brazil is probably the best of the BRICs.

Tax evasion and corruption cost developing countries an estimated $6 trillion in the decade to 2012. Don’t expect this to be high on the BRIC leaders’ agenda as they focus on their economic achievements. But they should spare a moment to talk about the shenanigans their taxmen are failing to catch.