International Anti-Corruption Day was celebrated on 9 December around the world. Here a few activities convened by UNCAC Coalition members to mark the day:

In Afghanistan, the Afghan Anti-Corruption Network (AACN) held, for the first time ever in the history of Afghanistan and the region, a peaceful and healthy protest against corruption. The main activities were 5 Km races against corruption in the capitals of the six provinces of Afghanistan. In each province more than 400 people took part in the races and every participant received a T-shirt with slogans and logos of fighting corruption designed by the AACN. More than 200 civil society organizations, media outlets and some private sector representatives volunteered to support the races. AACN used the races to raise awareness on corruption, gain the commitment of thousands of Afghans, to advocate for real reform and changes in Afghanistan, to promote peaceful and non-violent demonstrations and to promote a culture of volunteerism.

In Bangladesh, under the slogan ‘Let’s fight corruption in the spirit of independence and invincible youth’, Transparency International Bangladesh organised several activities both at a local and national level for 9 December. The main highlights were a human chain in the capital and the opening of an exhibition of cartoons about corruption. Committees of “Concerned Citizens” in 45 regions across Bangladesh and members of our youth group YES organised rallies, seminars and roundtables, information fairs, human chains, cartoon exhibitions, street theatres, anti-corruption oath-taking and various other outreach activities which were attended by tens of thousands of people including public officials and representatives, professionals, civil society, media, business and the other people. The large majority of the participants were the young generation including students of schools, colleges and universities. 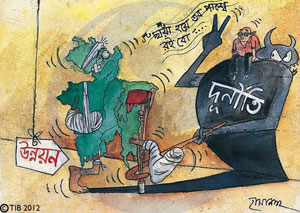 Cartoon Competition: Winner of Group A, age 13-18. The week-long anti-corruption cartoon exhibition was opened at the Zainul Gallery of Faculty of Fine Art, Dhaka University.

TI Bangladesh also produced an animated TV advertisement aired in country’s four leading satellite TV stations, and held a debate competition in partnership with Jahangirnagar University Debating Organization, in which more than a hundred women from all over the country took part to debate over corruption and gender. Under an arrangement with the Ministry of Telecommunications and the Bangladesh Telecom Regulatory Commission, a public SMS campaign featuring anti-corruption messages was broadcasted on 9 December by the country’s six mobile operators whose combined subscribers now stand over 90 million. (See Anti-corruption day in Bangladesh)

In Cambodia, the Coalition for Integrity and Social Accountability (CISA) joined Pact, Transparency International in Cambodia to organise many anti-corruption themes events which attracted over 2,000 participants. The events included a conference, a concert and a theatre play on December 9 at the Southeast Asia TV station in Phnom Penh.

In India, Gram Bharati Samiti (GBS) organized a state level seminar in Jaipur on ‘Combating corruption in electoral system and bureaucracy’. Representatives of civil society organisations, journalists, social activists, Gandhian workers and others discussed strategies to make the upcoming elections for national parliament and state assemblies free from corruption. The leaders of political parties were also invited to share their views.

In Morocco, Transparency Morocco marked Anti-Corruption Day by using art to work with young people in raising awareness about corruption. Their project, Paroles Urgentes, meaning fast words, performed street theatre, break-dancing, slam poetry and music to celebrate the day. The project aimed to combine the quick tempo of hip-hop culture and youth with the urgency of corruption and what everyday citizens can do about it. View the practice sessions.

In Pakistan, a walk and seminar in Punjab were organized by Transparency International Pakistan through the Rural Development Organisation. Kutcheries or communal gatherings for awareness raising were organised in Shikarpur district and Ghotki district, Sindh, through the Youth Development Forum and in Burewala district, Punjab by the Sudhar Development Organisation. A college in Karachi organised an activity linked to Transparency International’s ‘Time to Wake Up’ campaign.

In Peru, the Forum Solidaridad Peru designed a so called “collect for the cats”, so that corrupt “rats” don’t win. With the network InterQuorum, space for the youth at the national level, an information and citizen mobilisation campaign was organised.

In South Africa, from Friday 7 December, Corruption Watch launched a video showing nine ordinary young South Africans speak out about how corruption affects their daily lives. It documents experiences of corruption and practices such as dodgy dealings in government housing schemes, textbooks not arriving at schools, or educators demanding sexual favours in order to pass their female pupils.

In Ukraine, the groups organising the civic monitoring of implementation of the State Program of Corruption Fighting and Prevention for 2011–2015 presented their preliminary results on Anti-Corruption Day. The monitoring process was undertaken by Transparency International Ukraine in partnership with other organisations including the Anti-Corruption Council of Ukraine, the Ukrainian Institute for Public Policy, the Centre for Political and Legal Reforms and the Open Society Foundation. Financial support for the project is provided by the MATRA program (the Embassy of the Kingdom of the Netherlands) and Renaissance International Foundation.

» More activities from Transparency International Chapters for 9 December can be consulted here.