Home > News > Implementation of London Anti-Corruption and GFAR Commitments: Nigeria Is on Course 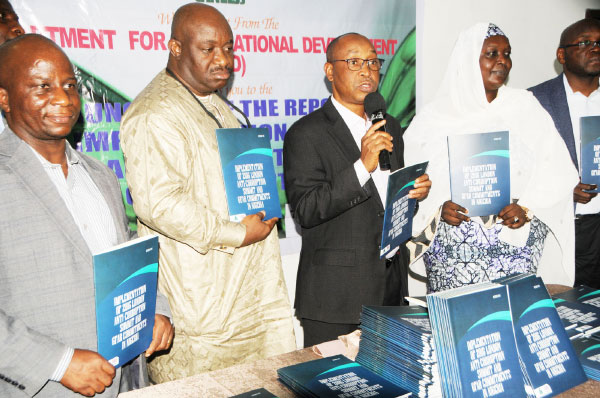 Three years after the London Anti-Corruption Summit where Nigeria signed on to the Open Government Partnership (OGP) and committed to Global Forum on Asset Recovery (GFAR), Nigeria has largely implemented its commitment.

Executive Director of Africa Network for Environment and Economic Justice, ANEEJ, Rev David Ugolor stated this at the launch of a well-documented assessment report which his organisation carried out through a research independently conducted with support from the British Department for International Development (DFID) under the Anti-Corruption in Nigeria (ACORN) Programme.

“One can safely state that the 2016 London Anti-corruption Summit and the follow-up Global Forum on Asset Recovery (GFAR) of 2017 held in the United States of America were parts of the efforts to end an undesirable practice in order to bring succour to victims of corruption and enhance development in affected countries. Nigeria is course in the implementation of both commitments as revealed by the assessment we carried out.

“Having attended the 2016 London Summit and played a significant role by leading over ten Civil Society Organisations to the GFAR in USA and presented CSO’s position on the challenges posed by corruption along with possible ways to move forward, ANEEJ has relentlessly implemented various projects that will remove the cankerworm called corruption in both public and private sector. Since that historic summit in London and Nigeria’s signing on to the Open Government Partnership (OGP), ANEEJ has collaborated with government agencies, and other civil society partners to take the OGP to sub-national level.

“I am delighted to say that our efforts have not been in vain as one state after the other sign on to the OGP. It is a thing of joy that from the initial single membership of Kaduna State, 13 other states like Niger, Anambra, Enugu, Ebonyi, Abia and the commendable most recent efforts of Edo State Government among others are fully in the OGP while others are in the process of on-going engagements with state and non-state actors,” Ugolor stated.

On the use of the returned $322.5million Abacha Loot returned from Switzerland under the GFAR commitment, the ANEEJ boos said his organisation has been monitoring the disbursement of money through a project called Monitoring of Recovered Assets in Nigeria through Transparency and Accountability (MANTRA).

“We are working with CSO partners in all the six geopolitical zones of Nigeria, and have successfully deployed over five hundred monitors and supervisors across the states where the loot was being returned to the poorest of the poor through the National Cash Transfer Office in the Conditional Cash Transfer programme of the Federal Government of Nigeria in line with the MOU signed by the Nigerian Government.

“This report we are launching today is our dispassionate documentation of the implementation of the 2016 Anti-corruption Summit and GFAR Commitments. ANEEJ’s expectation is that the fight against corruption should be a concerted one that requires the participation of all and sundry. It is our hope that if all hands are on deck, freedom from the stranglehold of corruption and its attendant consequence of pervasive poverty in our country will be a thing of the past.” Ugolor further stated.

While acknowledging validation of the report by the Ministry of Justice/Open Government Partnership Secretariat and the Nigerian Extractive Industry Transparency Initiative (NEITI), both government agency/institutions, ANEEJ thanked them for reviewing some of the key recommendations contained in the report and promised to continue the assessment annually as its contribution to the fight against corruption in Nigeria.