Home > Blog > Fighting for the Jan Lokpal: the People’s Movements against Corruption in India 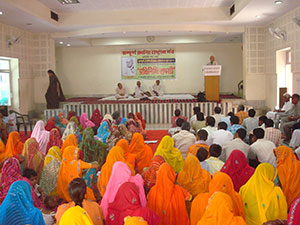 Conference to encourage women in the fight against corruption
Credit: Bhawani Shanker Kusum

Rampant corruption in politics and public administration has been a big issue in India for a long time. There have been a number of significant movements urging the Government to act against corruption. In particular, calls to pass the Jan Lokpal Bill to establish a citizen’s ombudsman have long been heard from prominent activists and civil society organisations. The government has wavered on this issue for many years and campaigning groups are still demanding laws that really work to deter corruption in public office.

The first push for change

The “JP movement” or ‘Sampoorn Kranti Aandolan’ (Movement for Total Revolution, lasting from 1974–76) was the second largest movement in India after its movement for independence. It was led by the revered Gandhian leader Loknayak Jay Prakash Narain (JP), as he was popularly known. Loknayak means leader of the people.

Due to JP’s untimely death in 1979, the organisation broke down and scattered into several small groups. The movement lost its drive and sadly, its ambitions to challenge the whole socio-political system faded.

A new beginning in the fight against corruption

A new era of change began in 2011 with some small actions initiated by several Gandhian volunteers and social activists around India. Among them was a notable campaigner against corruption, Mr. Anna Hazare — a non-political person committed to Gandhiism.

In a manner reminiscent of Gandhi, Anna Hazare went on indefinite hunger strike to put pressure on the government to enact a bill which would effectively deter corruption, redress citizens’ grievances, and protect whistleblowers. Under his leadership, an impressive people’s uprising began, peaking on 16–27 August 2011. These campaigning efforts ended after 12 days when the government agreed in principle to make the proposed amendments to the Bill.

The Lok Sabha (Lower house) and Rajya Sabha (Upper house) passed a resolution conveying the ‘sense of the House’ on the proposed amendments to the Lokpal Bill, agreeing in principle that:

The politicians cheated Anna and the people

The promises given by the government to Anna, his followers and the Indian people were not honoured. The Bill was referred to a committee for consideration and it was never passed. No Lokpal Bill has been successfully passed through the Upper House and civil society is still calling for an independent body to investigate and prosecute instances of public corruption.

Split within the campaign

The campaigners and the people of India were disappointed and the members of Anna’s campaign split. A group led by Mr. Arvind Kejariwal (a civil servant leaving his government job) decided to form a new political party, select honest candidates and attempt to change the political system by entering the Parliament. Another group, led by Anna Hazare, reconstituted and declared to reinvigorate a national level campaign against corruption as of January 2013. On January 30, the day of Gandhi’s assassination, this group organised a big rally in Patna.

Currently there are several other social and political groups in different parts of India which are involved in mobilising people against corruption, including the non-political sections of the followers of Gandhi and a forum named ‘Sampoorn Kranti Rashtriya Manch’ (the National Forum for Peaceful Total Revolution) was formed in April 2011. It represents a group of revolutionary forces believing in the philosophy of Gandhi and JP (Jay Prakash Narain) and is committed to eradicating corruption from politics and bureaucracy using peaceful means.

Many activities have so far been organised by the forum, including:

With the election due in 2014, we hope that the political system in India will be changed drastically in response to the voice against corruption raised by the people from all corners and all segments of Indian society. This voice is growing louder day by day and is gradually converting into anger.

The National Forum for Peaceful Total Revolution is currently campaigning for the ‘Right to Recall’ corrupt or inefficient public representatives, to check the rampant corruption in the country and for a clean and efficient people’s governance with zero tolerance for corruption.

A meeting was held in Patna on March 17, 2013 to discuss the possibility of boycotting general election candidates who have been charged with corruption offences. Almost 100 people from many regions of India participated.

A brief history of the Lokpal Bills in India

Between 1968 and 2008, ‘Lokpal bills’, to establish an independent body to investigate corruption in public offices have been brought before the Parliament eight times, but have never been passed. Lokpal is Hindi for Ombudsman.

In April 2011 one such bill was brought before the Lower House. Protests from civil society, led by Anna Hazare, dismissed it as a weak piece of legislation designed to placate rather than bring real change.

A joint committee was set up including both government and civil society representatives to draft a new bill together. This was seen as a victory for the civil society movement.

In May and June 2011, a number of meetings were held but no agreements could be reached regarding the key issues, including whether the Prime Minister would be subject to the scrutiny of the proposed Ombudsman.

Government and civil society split and drafted their own versions. The Jan Lokpal bill, (Citizen’s Ombudsman Bill) was drafted by prominent activists, including the former Supreme Court judge, Justice Santosh Hegde. Hazare began a hunger strike on 16 August 2011 in protest against the government’s proposed version which began its way through the legislative chambers.

On August 27 Anna ended his 12 day fast when the lower and upper house agreed in principle to some of the proposed amendments to the Bill.

The Bill went to a committee for consideration. The Bill was passed by the Lower House in December 2011, but failed to pass through the Upper House, as heated debates over the precise provisions prevented a conclusion within the allocated time.

In May 2012 the Bill was reintroduced in the Upper House and then referred to another panel.

44 years after the first introduction of a Lokpal Bill, India is without an independent constitutional body charged with investigating corruption in the public sphere. Anna Hazare continues to criticise the most current draft as “useless” in the fight against corruption.

Bhawani Shanker Kusum is the Convener of the “National Forum for Peaceful Total Revolution” and is a proponent of the Gandhian philosophy ‘Sarvodaya.’