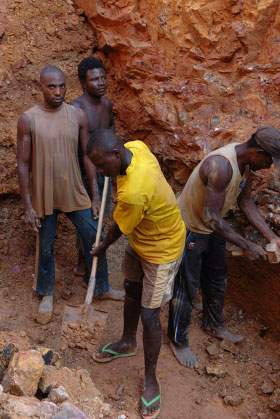 Botswana’s consistently impressive ratings in Transparency International’s annual Corruption Perceptions Index (CPI) is encouraging for the governments and citizens of other extractive economies in sub- Saharan Africa. Not only has Botswana ranked the highest of all African countries for the fifth successive year, but it has also improved its overall rank and score in the global survey.

Extractive economies are those that are dependent on the extraction and exportation of their natural resources and are often characterized by, among other things, poor governance, patrimonialism and corruption. States such as Nigeria, Sudan, Congo, Sierra Leone and Angola illustrate this correlation. Botswana, however, has successfully managed these characteristics despite its economic dependence on the mining and sale of diamonds; proof that extractive economies can indeed effectively fight graft. The country’s success in this respect has come not from any initiatives unique to it alone, but from the dedication of the state and the efficacy of its legal and institutional structures to deal with corruption.

The country has been relatively proactive in passing and implementing anti-corruption and supporting legislation. These include the Corruption and Economic Crime Act of 1994, the Proceeds of Serious Crime Act of 1990, the Money Laundering Act, the Banking (Anti-money laundering) Regulations 2003 and the Penal Code. Botswana also acceded to the United Nations Convention against Corruption (UNCAC) in 2011.

Beyond these laws and structures, however, are the willingness and determination of the institutions’ charged with preventing and prosecuting corruption to carry out their mandate. The powers and functions of the country’s anti-corruption body, the Directorate on Corruption and Economic Crime (DCEC), are largely similar to those of a number of sub-Saharan Africa states: investigation and arrest. The conviction rates of the DCEC, however, are relatively high in comparison to those of other states. This indicates a readiness on the part of the DCEC and the Director of Public Prosecutions (DPP) to effectively investigate and successfully prosecute incidences of corruption on one hand, and on the other a willingness of the judiciary to convict those found to have been involved in corruption.. These functions are critical to any country’s endeavours to fight graft.

The improvement in Botswana’s already impressive ratings, and those of similar economies, such as Sao Tome and Liberia, is proof that despite the seemingly unique governance challenges posed by extractive industries, these economies can, indeed, effectively fight graft within their jurisdictions.

Maureen is a Programme Officer at the Africa Centre for Open Governance (AfriCOG) and the Coalition Regional Coordinator for the Sub-Saharan Africa region.