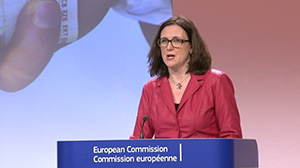 Access Info Europe today welcomed the European Union’s first anti-corruption report on Spain, which called for measures to strengthen Spain’s transparency law adopted in December 2013 in line with those which civil society has been campaigning for.

Access Info Europe urged the Spanish government to act immediately on the recommendations, which include guaranteeing independence of the appeals body, enhancing sanctions for non-compliance, and a narrower scope of exceptions to the principle of access to information.

The EU’s report also highlights the extreme culture of corruption in Spain, noting that 65% of the public believe that they are directly affected by corruption, the highest figure in Europe and well above the 25% average.

“A strong access to information regime is essential for fighting corruption and it’s once again clear that Spain is seriously lagging behind on transparency and will continue that way unless urgent measures are taken to strengthen the legal framework for access to information,” commented Helen Darbishire, Executive Director of Access Info Europe.

Access Info Europe regretted that the EU had not also called on Spain to recognise the fundamental right of access to information in line with the European Court of Human Rights jurisprudence and the fact that access to EU documents is a right of all EU citizens and residents.

The EU report also points out the two year period for the law to come into force at all administrative levels. Access Info Europe has expressed concerns that in spite of the pressing need to tackle corruption and secrecy, the law will not be in force at the national level until 10 December 2014, and at the regional and local level not until December 2015.

The EU’s anti-corruption report also highlights challenging areas where Spain needs to enhance public integrity and transparency; lobbying, political party financing and public procurement. Access Info in January 2014 launched a campaign in Spain for regulation of lobbying, which is currently unregulated, and for specific rules which will strengthen transparency of the activity of lobbyists.