Home > Blog > Conference of States Parties in Marrakesh: The Countdown 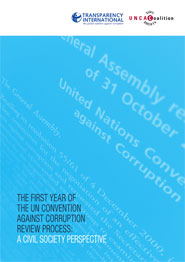 The final UNCAC Coalition preparations for the 4th Session of the UNCAC Conference of States Parties (COSP4) in Marrakesh, Morocco, 24 – 28 October 2011 are in full swing now. Planning is under way for all kinds of activities, from panels to performances.

The big news today is a notification from the UN Office on Drugs and Crime (UNODC) that all our UNCAC Coalition submissions to COSP4 were posted on the UNODC website and will be official COSP4 documents. This is a landmark for CSO engagement with the UNCAC COSP.

We sent sixteen written submissions to UNODC for COSP4 under Rule 17 of the COSP Rules of Procedure. You can find all the documents here, scrolling all the way down to the documents from Transparency International, the secretariat of the UNCAC Coalition.

The documents submitted and accepted by UNODC are:

This is a big step forward. It establishes an official international public space for civil society groups to communicate their views about their countries’ fulfilment of their UNCAC obligations. Of the other anti-corruption convention review processes, only the one for the Inter-American Convention against Corruption posts civil society evaluation reports online. The OECD and GRECO monitoring processes do not.

The decision to accept these UNCAC Coalition submissions recognises the importance of giving civil society a voice in UNCAC implementation. This in line with UNCAC’s provisions (Article 13) and with the COSP3 resolution establishing the review mechanism. Even though the CSO submissions are pretty well hidden on the UNODC website, it’s a start. In the interests of easier public access to important review-related information, it would help if UNODC created a single web page with links to key inputs and outputs of the country review process like the government self-assessment reports and the official review reports produced by the review teams (unfortunately only publication of the executive summaries of the review reports is mandatory). And this would also be the right place to include CSO country review reports like the ones we submitted.

In the meantime, to ensure that the CSO executive summaries and full reports are more easily accessible, we’ve set up a page on the UNCAC Coalition website where they can be found.

By the way, there are now two new official Executive Summaries of first year country reviews online at the above UNODC link, for Bulgaria and for Jordan. These add to the four already available, namely for Finland, Mongolia, Spain and Uganda. Another one for Chile seems to be close to completion—there is already a box waiting for it at the link above. But it looks like only 6 or 7 first year country reviews out of 26 will be completed when COSP4 starts next week.

At the same UNODC link above, you can also find other documents for the upcoming CoSP and more are expected to arrive in the next days.