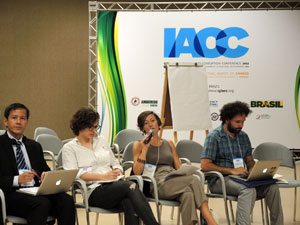 On the final day of the 15th IACC in Brasilia (7-10 November 2012), 67 IACC participants joined 6 panellists at a Coalition workshop entitled “Joining forces for enforcement: Making UNCAC work”. Vincent Lazatin, Chair of the UNCAC Coalition and moderator of the workshop, opened the discussion by pointing out that as of October 2013, UNCAC will have been in existence for 10 years, yet important gaps remain when it comes to implementation, including in the area of criminal law enforcement. Enforcement is the area currently under examination in the first cycle of UNCAC reviews. Vincent also introduced the participants to the workshop’s aims, chief among them to prepare for joint campaigning ahead of the 5th UNCAC Conference of States Parties (COSP5) due to take place in November 2013. 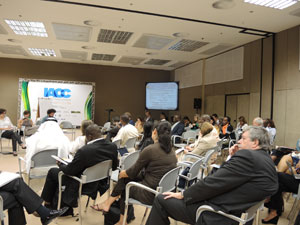 The keynote speaker Michelle Milk Reyes of the Coalition for the International Criminal Court (CICC) made an inspiring presentation reviewing the lessons from the CICC’s successful campaign to achieve the establishment of the International Criminal Court in 2002 and the experiences of their national coalitions in working together since then. She was followed by Maud Perdriel-Vaissière of the NGO Sherpa who presented the draft UNCAC Coalition proposals for COSP5. These include a call for COSP5 decisions restricting immunity for public officials, requiring agreed standards for settlements and calling for improved efforts to prevent money laundering. They also ask for establishing a complaints mechanism within the framework of the UNCAC and for initiation of discussions on an international anti-corruption tribunal. 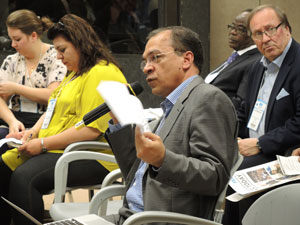 Offering a national experience of campaigning on enforcement, panellist Ezequiel Nino of ACIJ discussed a recent campaign in Argentina. Interventions from two additional panellists, Mirella Frahi of UNODC and Babatunde Oluajo of the Zero Corruption Coalition in Nigeria emphasized the importance of joining forces with the private sector to further campaign objectives. Alix Dunn of Tactical Tech Collective explained the potential of technology to convey messages about corruption to the wider public.

The workshop participants exchanged opinions on the proposed objectives and how to achieve them. Some expressed the view that the Coalition proposals on immunities, settlements and prevention of money laundering were timely and well-suited to the 5th COSP forum. Others considered the proposals for a complaints mechanism and an international tribunal would be the start of for a longer-term discussion. “You have to dream” said Dimitri Vlassis of UNODC, “If we hadn’t dreamed we wouldn’t have the UNCAC”. All agreed that it was important to start advocacy work early on and work closely with governments on proposed text for COSP5.