For any conference or workshop I attend, I have a very simple standard to assess whether or not the time was well spent: if I can collect at least three or four new ideas that I have never heard of before and that significantly add to my everyday work, then it was worth it. The training for civil society organisations on the UNCAC Review Mechanism that took place in Laxenburg (Austria) from 9-12 October 2012 most definitely fulfilled it. 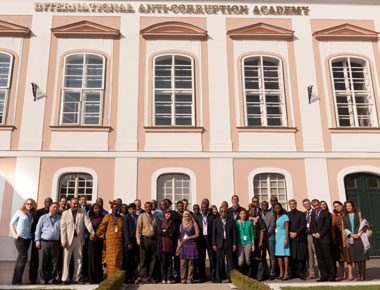 In most countries around the world governments are reluctant to effectively step up against corruption even if they repeatedly claim their commitment to act against it. With such political difficulties, it is rather challenging for any civil society organisation to move their government to act and achieve real results. Since UNCAC entered into force, civil society has come several steps closer to having real effects on governments’ anti-corruption efforts. However, until it is fully implemented, the convention itself is only an extensive list of promises on a piece of paper.

The civil society training in Laxenburg provided all the skills an anti-corruption activist or advocate needs to push its government to enforce the UNCAC. Participants received a thorough explanation of the UNCAC review mechanism, including information on the official review procedure and methodology presented by experts of UNODC who had first-hand expertience. The training also covered the entry points for civil society to take part in the review procedure in a meaningful way. and provided explanations of the various articles of the convention which were helpful to participants without a legal background. Transparency International-Secretariat staff gave practical advice on civil society involvement, particularly regarding the preparation of parallel review reports. They also trained the participants on planning their advocacy activities and communication. Last but not least the participants also became familiar with the possibility of involving the private sector in the review process and in advocacy about UNCAC implementation.

It varies from country to country whose opinion can have the most effect on a government: its peers? local civil society groups? the local media? the business sector? Thanks to the training, all participants gained enough knowledge to assess their own possibilities, identify windows of opportunities and tailor their advocacy and communications plans to influence their government to take the UNCAC seriously and implement it.

When starting to write about my expectations, I missed a crucial element: the participants. There’s nothing more inspiring to me than spending time with brave, clever and committed colleagues. Needless to say, during these four days I felt very lucky to learn from such wonderful people.