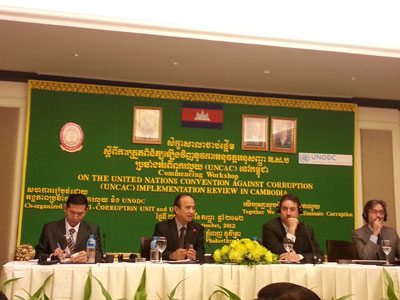 Cambodia is perceived to be one of the world’s most corrupt countries, ranked 164 out of 183 countries in Transparency International’s Corruption Perception Index (CPI)i. However, it is interesting to note that the Royal Government of Cambodia (RGC) chose to take a significantly inclusive approach in the review of its implementation of the United Nations Convention against Corruption (UNCAC).

With the support of United Nations Office on Drugs and Crime (UNODC), the Anti-Corruption Unit of Cambodia organized the first Workshop on the UNCAC Review process on 27th and 28th of September 2012 with the aforementioned stakeholders. The purpose was to introduce participants to the UNCAC and its review mechanism, as well as to engage them in the review process and ultimately produce a report that reflects the holistic and realistic evaluation. 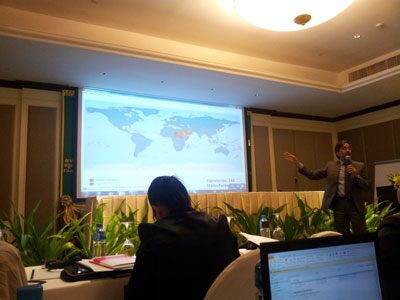 Because of TI Cambodia’s strong credibility and leading role in the fight against corruption in Cambodia, H.E Prime Minister has appointed the Executive Director of TI Cambodia to not only participate in the review process, but also become one of the members of the Steering Committee for the UNCAC Review.

With these new roles, TI Cambodia, , is going to be more involved in reviewing the implementation of the convention, as well as establishing a closer relationship with the Anti-Corruption Unit and the government in order to influence the anti-corruption agenda and push for the stronger implementation of the UNCAC.

Mr. Preap Kol is the Executive Director of TI Cambodia. A founder of the organization, Mr. Kol has been integral to the development of its legal framework, strategic plan as well as the fundraising aspects for the organization.