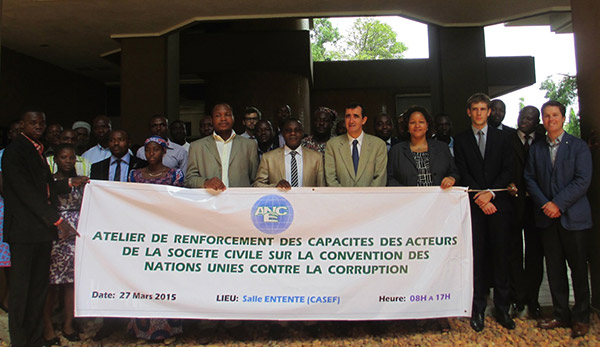 On 27 March 2015 ANCE-Togo organised a workshop on the UN Convention against Corruption (UNCAC) in Lomé. There were about 50 advocate participants from civil society organisations (CSOs), trade unions and public and private media organisations.

The aim of the workshop was to develop capacity and knowledge to encourage civil society advocacy for the implementation of the UNCAC. Although Article 13 of the UNCAC encourages the participation of “individuals and groups”, including “civil society, non-governmental organizations and community-based organizations”, in Togo there has been limited engagement[1].

The National Assembly ratified the UNCAC on18 May 2005 and Togo is also a party to the African Union Convention on Preventing and Combating Corruption and the ECOWAS Protocol on Corruption. However, in a recent examination pursuant to Article 63 of the UNCAC, under “Mechanisms for implementation», it was found that despite some efforts there was a long way to go to implement the UNCAC in Togo: there had been little progress in the development of legislation to fight corruption, existing law did not cover all the UNCAC obligations and the national institutions that had been created to fight corruption were not operational.

The workshop’s opening ceremony was followed by presentations relating to six themes[2]:

Following each presentation participants asked pertinent and interesting questions, which were answered clearly and concisely. The debates were rich and edifying, focusing mainly on the strength of the UNCAC and its implementing mechanisms, the effectiveness of national institutions and how civil society could strengthen their role in fighting corruption.

The participants demonstrated great enthusiasm for the UNCAC and the workshop marked a new beginning for civil society in the fight against corruption in Togo. All participants as well as some development partners present in this workshop expressed the wish for Transparency International to set up a national office in Togo and all CSOs participants formulated the following recommendations:

The workshop saw considerable media coverage, with a mention in more than 50 online and 10 print publications (including two national newspapers –Togo Presse and ATOP), three television reports (including national television) and 10 radio stations.

This promising start has provided the momentum for much more work to be done. A number of reforms are in progress that will affect anti-corruption work in Togo and will require increased civil society participation to be successful. There are opportunities for participation and engagement in the work on revisions to the penal code and criminal procedure code, discussions in the national assembly relating to the creation of a high authority on the fight against corruption, and the implementation of assets declarations for public figures.

ANCE-Togo encourages international support from Transparency International, the UNCAC Coalition, the UNODC and all technical and financial partners to assist in the implementation of the recommendations and to ensure that anti-corruption work in Togo is supported and strengthened with civil society participation.