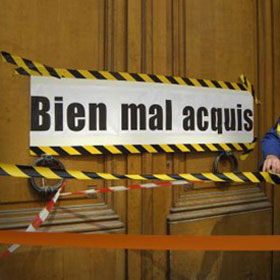 Of the hundreds of billions of dollars illicitly acquired by corrupt officials in the last 15 years, no more than US$5 billion has been recovered and even less returned to the countries from which they were taken, according to World Bank estimates. This is not an acceptable state of affairs. The UNCAC Coalition therefore calls on States Parties to adopt these four actions during the November conference in Panama:

Why did countries that had been receiving stolen assets freeze and investigate them only when the governments—such as in Egypt, Tunisia or Libya—began to collapse? It is an important question, since it is well known that the longer one waits to take action, the harder it is to recover stolen assets. The Coalition believes that countries receiving illicit assets should have the necessary legal tools to take enforcement action when they have credible information that such property could be proceeds of corrupt activities.

Victim states are rarely compensated for the harm caused to them by corruption. And yet, the UN Convention against Corruption (UNCAC) does not differentiate between damages and stolen or embezzled property: both are assets that ought to be returned to harmed countries. The Coalition asks States Parties to recognise the damage caused by corruption and ensure compensation to states harmed.

Information about cases in other countries is crucial for states to be able to take action to recover property. However, this information is not always easily accessible to enforcement authorities in other countries. The Coalition calls for this situation to be corrected through extensive implementation of UNCAC Article 56.

States Parties should ensure that these principles — critical to the credibility of the whole recovery process — are strictly applied regarding the return of assets.

Maud Perdriel-Vaissière is a legal expert on asset recovery, working as a pro bono consultant for the UNCAC Coalition.