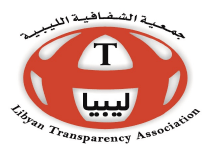 The association focuses on curbing corruption and promoting the principles of transparency, good governance and access to information. Concrete transparency provisions should be written into the transitional constitution to ensure the just exploitation of Libya’s natural resources.

We organised the Round Table for a transparency budget in Libya in cooperation with the Audit Bureau. You can see the summary of the event here:
https://www.facebook.com/lpc.ly/videos/1700886830167538/

The Libyan Transparency Association organized the First Transnational Organized Crime Summary on 12 January 2014 at Tibesti Hotel, Benghazi. Transnational organised crime manifests in many forms, including as trafficking in drugs, firearms and even persons. At the same time, organised crime groups exploit human mobility to smuggle migrants and undermine financial systems through money laundering.

We have successfully completed the training session in Benghazi on the role of citizens and civil society organisations in local democracy. This training was held by the Libyan Transparency Association in partnership with Civil Initiatives Libya/ACTED with support from the European Union. This training is part of LTA’s project to build partnerships between local actors and local governments. The project is funded by the Quick Impact Projects scheme. You can find more about it here:
https://www.facebook.com/218tv/videos/375066476168460/

We plan to push for new government and local government in Libya to have the checks and balances, accounting control, free access to information, human development and accountability to handle the flow of large sums of money.

We push for a parallel report on the commitment of the Libyan government to apply the articles and subjects of the UNCAC and to build a full strategy on the implementation of the convention in Libya, which includes effective applicable working plans, instruments, and reports to establish an independent authority for fighting corruption and to monitor the application of this strategy.

Since its founding on 5 May 2011, the Libyan Transparency Association the promotion of transparency and the fight against corruption are the most important objectives. Our work is dedicated to the second chapter of the UNCAC which addresses preventive measures to combat corruption. This includes policies, such as the establishment of anti-corruption bodies, or enhanced transparency in the financing of election campaigns and political parties.  Anti-corruption bodies should implement anti-corruption policies and the dissemination of knowledge, as well as they should be independent and have adequate resources at hand. They need to ensure that their public services are subject to safeguards that promote efficiency, transparency and recruitment based on merit.

On a practical level, the Libyan Transparency Association introduced the necessary amendments to the proposed law to establish a body to fight corruption in Libya in the spirit of the UNCAC.

The LTA participated in:

We have organised a dialogue entitled “The prevention of corruption in international standards and sector applications” in cooperation with the Arab Network Integrity and Anti-Corruption in Tunis on 28 January 2017. Furthermore, we prepared specialised working tools for the prevention of corruption according to the UNCAC. Participants were from the audit bureau, regulatory bodies, and the Libyan customs authority.