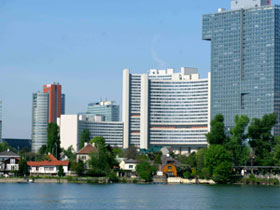 In 2009 I joined Transparency International and other UNCAC Coalition colleagues at the Third Session of the Conference of Parties to the UN Convention against Corruption (UNCAC) in Doha, Qatar.

As Advocacy Officer for the Global Alliance against Traffic in Women (GAATW), corruption wasn’t ordinarily within the scope of my work, but accountability was. This was the last opportunity to convince States of the need for transparency and inclusivity in a review mechanism due to be adopted at that session. Furthermore, whatever was agreed at UNCAC seemed almost certain to be repeated for its sister convention, the UN Convention against Transnational Organised Crime (UNTOC).

Sure enough, as States gathered to discuss UNTOC at its Sixth Session in Vienna, Austria this October an UNCAC-style review mechanism was on the table. UNTOC is the parent convention to the UN Human Trafficking Protocol and as such, provides the international legal framework to address human trafficking. If in Doha, I had felt frustrated and saddened by the lack of interest in a truly inclusive review mechanism, in Vienna this year, those sentiments turned to outright anger as some States resisted any civil society engagement at all.

After four years now of discussion on a review mechanism at UNTOC, little if any progress has been made. States did not even want to go as far as they had in Doha. Some objected to civil society participation whilst others refused to agree to a review mechanism funded from the regular UN budget. At the final hour, the process collapsed. The reason publicly given was that the process fell on the budget issue.

Review could give victims a voice in anti-trafficking responses

GAATW was heavily engaged in the drafting of the Human Trafficking Protocol in early 2000 and has followed its rapid ratification and implementation closely with our members worldwide. In practice States have relied greatly on civil society for the implementation of many aspects of the Protocol.

Therefore an inclusive and transparent review mechanism to UNTOC, would not just improve government accountability, but also that of civil society. Anti-trafficking organisations, projects and partnerships have rapidly multiplied in recent years, and as a GAATW report demonstrated, often with few checks and balances. Anti-trafficking legislation, policy and strategies drafted by crime control officials have been tested out on trafficked people and yet no feedback on their efficacy has been sought.

Trafficked persons can be vulnerable, disempowered and suffer extreme discrimination and exploitation. When working with individuals with such potential fragility there is no room for a hit and miss approach, nor to risk doing further harm in the clamour to do something.

GAATW grew of a need to amplify the voices of migrant women, seeking to speak not for women but with them. Over the past two years we’ve engaged in multi-country participatory monitoring and evaluation studies, with trafficked women, service providers and others to develop research methodologies which represent and document lived experiences of the anti-trafficking framework. We’ve learnt that not only are trafficked persons’ experiences complex, they also vary greatly between individuals.

Monitoring and evaluating the impact of anti-trafficking frameworks is no simple task and yet we’ve shown it can be done ethically and honestly, not for the sake of recriminations, just to ensure the countless efforts to combat trafficking worldwide achieve their objectives.

With States refusing to recognise the need to review anti-trafficking responses, let alone to engage civil society in such review, thoughts must turn to alternative approaches. After four years of diplomatic engagement, we cannot afford to wait any longer, it is our duty to ensure that processes are developed to monitor and evaluate anti-trafficking responses. The collapse of discussions in Vienna may mean civil society will have to lead this process from the bottom up and perhaps it will be all the better as a result.

Caroline Robinson is an Associate with the Global Alliance against Traffic in Women, specialising in accountability and participation.