We are writing on behalf of parliamentarians from around the world and from across Britain’s political parties, to make a common appeal to you, as we prepare for the AntiCorruption Summit you are convening in London.

The legislators we represent come from different cultures, speak different languages, profess different faiths and have been on opposite sides of warfare. But we are united by a common conviction: that corruption is now one of the single greatest threats to the development of societies, the security of nations, and human rights. 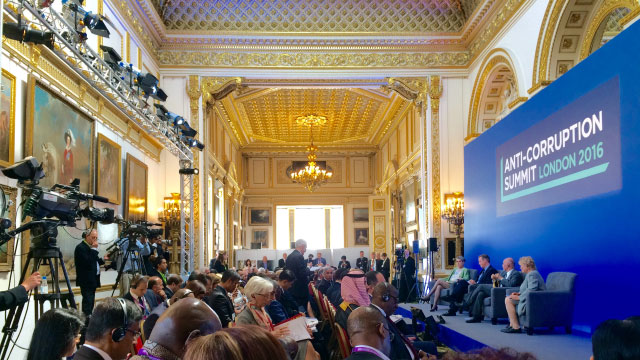 The 2016 London Anti-Corruption Summit, hosted by the Rt Hon David Cameron. The venue is Lancaster House, London. This photograph was taken on 13 May 2016, by Akaash Maharaj.

To give but one example, an estimated $1 trillion is siphoned out of developing countries each year through money laundering and other corrupt practices. By contrast, the total cost of achieving all eight UN Millennium Development Goals would have been $0.5 trillion.

There is a better world within our grasp: a world without hunger; without thirst; without needless disease. But corruption is stealing that world from us.

By its nature, corruption breeds in the dark and withers under the glare of public scrutiny. As a result, we believe that the most powerful tools to combat corruption are publicly accessible registers of beneficial ownership of corporations. These registers ensure that the true owners of corporations are known to public institutions, media, and citizens. They thwart the ability of the corrupt to hide their illicit wealth and the evidence of their crimes behind a veil of corporate anonymity.

We applaud your leadership in creating precisely such a national register for the United Kingdom. We can not overstate the importance of your decision, especially given London’s central role in global finance, nor do we underestimate the political capital you expended to take this stand. It has the potential to make the world a better place.

But we are deeply concerned that this potential will be left unrealised because of one catastrophic gap: Britain’s Overseas Territories and Crown Dependencies.

The Panama Papers have starkly revealed that many of these jurisdictions have become the venues of choice for the anonymous corporations that facilitate tax evasion, organised crime, and terrorist financing. Indeed, more than half the companies exposed by the Panama Papers were based in the British Virgin Islands alone.

The recent agreement with the Overseas Territories and Crown Dependencies gestures in the right direction, by committing them to create their own beneficial ownership registries. However, we are alarmed that these jurisdictions have retained the option to keep their registers closed to inspection by the public and the free press.

We respectfully submit that if territories under British authority are left free to give safe harbour to publicly anonymous corporations, then Britain’s achievements and credibility in the global anti-corruption movement will be undermined.

The parliamentarians, heads of government and heads of state who will gather at the International Anti-Corruption Summit in London will be there at your call, and will therefore look to you as they judge whether this will be an exercise in words or in deeds. We urge you to seize the moment and challenge the nations of the world to follow where you lead.

We urge you to announce that you will ensure that there will be public registers of beneficial ownership across the United Kingdom and the British Overseas Territories and Crown Dependencies.

Akaash Maharaj is CEO of the Global Organization of Parliamentarians Against Corruption, and leads the international alliance of democratically-elected legislators in its work combatting corruption, strengthening good government, and upholding the rule of law. He tweets at @AkaashMaharaj