On 8 April 2013, the Executive in Argentina introduced a package of six bills in Congress with the purpose of launching a major judicial reform initiative that, if upheld would have a dramatic institutional impact on Argentina’s system of governance. The bills fast became laws, passing quickly through both houses of the National Congress. Aspects of the reforms are now subject to constitutional challenge in the courts. 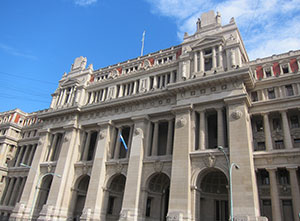 The reform package has been presented as a profound ‘democratisation of the justice system’. However, the Civil Association for Equality and Justice (ACIJ) believes that not only were the reforms passed too quickly (3 of the bills were approved by the senate within a week) and without adequate debate, but many of the provisions in the package are regressive – undermining access to justice and the protection of human rights.

The Executive has explained that the reforms would expand access to justice for the most vulnerable and minimise the influence of powerful private interests on the judicial branch. The package – consisting of six independent but complimentary laws – raises important concerns about issues such as delayed justice, conflicts of interest involving judges and favouritism in judicial processes.

As an actor with an established record of fighting for stronger and more transparent democratic institutions, ACIJ has been actively involved in the public debate about the new package. While ACIJ strongly agreed on the necessity of a comprehensive reform of the judiciary (something which it has for many years been campaigning for) – it strongly opposed several of the reforms. ACIJ believes that those reforms will in effect threaten the principle of separation of powers, judicial independence, accountability for corruption and the effective guarantee of fundamental rights on which our democratic system is based.

Three of the laws are gravely flawed.

The first of the three laws imposes onerous restrictions on the use of injunctions or intermediary relief (locally termed medidas cautelares, or “precautionary measures”). The government argues that there has been widespread abuse of this legal mechanism by politically powerful interest groups, who use it to avoid the application of State decisions which harm their interests. However there is also a long history of injunctions being used to guarantee basic rights of Argentina’s most vulnerable communities, where any delay in the application of justice would cause grave and irreparable harm to the litigants.

Law I will, among other things:

All of these measures, taken together, will distort the function of the injunction system and diminish the ability of individuals and communities to demand the immediate fulfillment of their rights when they have been violated.

The second of these laws proposes a significant reform to the Magistrate’s Council,the judicial body which is charged with a variety of important functions such as selecting new judges, assigning and disciplining (including suspension) of existing judges and managing the finances of the judicial branch. Currently, the Council operates with a hybrid structure, with three judges, six legislators (representing both the parliamentary majority and the principal minority party), two attorney representatives elected by the National Bar Association, one representative of the Executive Branch, and one law professor elected by academics. While it does not function perfectly, it does go some way to fulfill the constitutionally mandated goal to fairly represent different sectors and interests of society.

The reform replaces this system with direct popular voting for all Magistrate Council seats. These elections will take place at the same time as the presidential elections. The new law also lowers the requirement of a two-thirds qualified majority which currently applies to the Council’s more important decisions.

This will seriously affect the independence of the judicial branch given that a judge who decides against the national government on any issue (whether it be environmental protection, corruption allegations, or retirement payments) will know that the Magistrate’s Council would be able to sanction him or her.

The third law calls for the creation of another court level between the appellate courts and the Supreme Courts, referred to as the Cámara de Casación. The law’s proponents argue that it will lighten the burden of cases that the Supreme Court takes on, but ACIJ believes the new court will only add further delay to already delayed cases, and will dissuade lower-income litigants from continuing their cases.

In addition, Law III will:

ACIJ is absolutely committed to fighting for a judicial system which is less conservative, less beholden to powerful special interests, and more democratic, transparent and independent. We believe that when reforms of this magnitude are at stake, it is not only the judicial system which is in question, but the very vision of democracy that will guide generations to come.

In line with our years of work on these issues, ACIJ has worked in coalition with other civil society organisations to urge politicians to reopen the debate and allow for society to weigh in and amend the proposals. A just and democratic society can only be constructed through the participation of all, without respect to their beliefs or political affiliation, and at this crucial moment in Argentina’s history, ACIJ and our civil society allies are working together to make this ideal a reality.

The Asociación Civil por la Igualdad y la Justicia (ACIJ) is a nonpartisan and nonprofit organisation dedicated to defending the rights of most disadvantaged in society and strengthening democracy in Argentina. Founded in 2002, ACIJ aims to defend the effective application of the Constitution and the principles of rule of law; promote compliance with laws that protect disadvantaged groups and elimination of all discriminatory practices; and to contribute the development of practices of participatory and deliberative democracy.