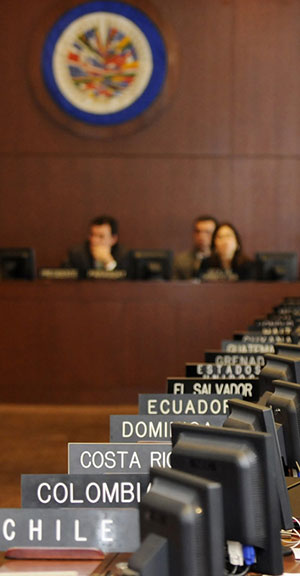 Latin America has shown progress in macroeconomic indicators in the last few years. The poverty rates have decreased and democracy prevails in a region where only a few years ago, dictatorships and civil wars were not unusual. But if we look closer, the region is still very unequal and many citizens suffer from a lack of security.

Both income inequality and violence are directly linked to weak democratic governance and corruption. Drugs, weapons and humans are smuggled with bribes, and misuse of public money means that funds that should be going to the public good, such as education, healthcare and housing, end up elsewhere, thus hindering development.

More than 15 years ago and after major corruption scandals that involved heads of state in many Latin American countries, a few countries in the region, under the umbrella of the Organization of American States (OAS), decided to create and promote what became the first supranational commitment to fight corruption: the Inter-American Convention against Corruption, which has been adopted by all countries in the OAS, except Barbados.

For the last 10 years, the convention’s implementation has been monitored by the Mechanism for Follow-up on the Implementation of the Inter-American Convention against Corruption (MESICIC).

Civil society organisations (CSOs, sometimes referred to as NGOs) play a role in this effort, too. The importance of civil society participation in the MESICIC is outlined in the Report of Buenos Aires, the grounding document of the mechanism, which says that “in order to obtain better input for its review the Committee shall include in the provisions governing its operation an appropriate role for civil society organizations.”

In many ways, the MESICIC has been true to its commitment in giving civil society a meaningful role in the convention’s review. It sets a good example for other convention review mechanisms, including that of the UN Convention against Corruption.

Civil society groups can participate in the monitoring exercise in different ways. They can respond to the same questionnaire as their governments do; participate in on-site visits; and present the findings of their own reports in a meeting in Washington with government representatives from all the MESICIC states parties. To participate in the meeting, a civil society group must have a written report on the state of implementation and be registered as an NGO with the Organization of American States.

Venezuela, however, is an example of where participation has been hindered. For a CSO to be involved in the process there, it must be an NGO “in accordance with the internal legislation of the respective State Party.” According to Venezuelan jurisprudence, organisations receiving funds from abroad are not consider NGOs.

The latest informal MESICIC Committee of Experts meeting for civil society organisations took place the week of 9 September 2013. It was the second meeting to be live-streamed so that people outside the room could listen to the views of civil society on how their country is implementing the convention and could follow the questions from government representatives. Civil society representatives from Chile, Colombia, Guatemala and Panama presented the findings of their reports. (There were no representatives for the other country being evaluated, Uruguay, as no civil society group from there responded to the questionnaire.)

Even if the monitoring process is open to civil society, the mechanism has not yet granted civil society groups observer status at the meetings. This would allow the review process to gain credibility and be more effective. If left out of the room, civil society cannot contribute to the real-time discussions. If they were in the room, they could provide relevant information to the questions on the table.

Since the 1990s, Transparency International has played a key role in this convention and its follow-up mechanism. It has also contributed information to the MESICIC and advocated for a stronger and more transparent review mechanism that is more open to civil society.

A decade after the mechanism was put in place and after a review of the Inter-American Convention against Corruption, now is a good time to take stock on whether it has achieved its goal of reducing corruption levels in the Americas. The mechanism alone is an achievement. Civil society has gained space and credibility and its contribution has been proven useful to MESICIC states parties, and we are positive that the MESICIC has helped states parties translate the convention into national law. However, we also believe that there is still a lot of work to be done to have these laws enforced and allow citizens to live in more equal and secure societies.

Marta Erquicia is a journalist who works in the Americas’ Department at the Transparency International Secretariat, where she coordinates TI’s work in the Inter-American Convention against Corruption.