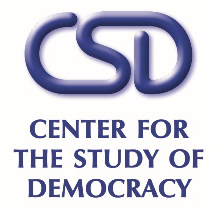 Founded in late 1989, the Center for the Study of Democracy (CSD) is an interdisciplinary public policy institute dedicated to the values of democracy and market economy. CSD objectives are:

CSD has extensive track record in the field of anti-corruption, including more than 50 bilingual publications (including national and regional corruption assessment reports). In the early 2000s CSD set up and managed the Bulgarian anti-corruption initiative Coalition 2000, singled out as a national best practice by the World Bank in its Anti-Corruption in Transition series. CSD has designed a state of the art Corruption Monitoring System (CMS), included in the UN Anti-Corruption Toolkit. The key findings of the CSD research are presented at annual anti-corruption policy forums and in the annual Corruption Assessment Reports. CSD’s efforts in the good governances domain have been scaled up through the SELDI initiative, initially established in 2001 and further re-started in 2012. CSD piloted the CMS regionally through SELDI, thus providing unique civil society insights into the national and regional anti-corruption agendas.

CSD also performs analysis on the state capture phenomenon, the fraud and corruption risks in the area of public procurement, the nexus between European financing and anti-corruption, and the policy options for countering money laundering.

Activities in relation to the UNCAC

CSD is engaged with the issue of corruption most notably since 2000, providing policy assessment and advice to the Bulgarian government and the European Commission. The Southeast Europe Leadership for Development and Integrity (SELDI) initiative, coordinated by the CSD, has been in the recent years able to further its impact in the SEE region, upholding the UNCAC objectives. In its flagship report Shadow Power: Assessment of Corruption and Hidden Economy in Southeast Europe, SELDI underlines that in none of the countries in the region has there been a clear sustained policy breakthrough in anticorruption though efforts to deliver technical solutions and to improve the functioning of the law enforcement institutions have continued.

In addition, CSD is regularly consulted by the European Commission services and has good working relations with DG NEAR, DG Home, and DG Justice. CSD experts are members of distinguished expert groups such as the UNODC expert group on monitoring UN Convention against Corruption, the EU Group of Experts on Corruption, etc. They are regular speakers at European Parliament hearings.

The national annual Corruption Assessment Reports and the SELDI Regional Anti-Corruption Reports present a general evaluation of the state and dynamics of corruption in the society and of the efforts to counteract and prevent corruption during the respective year. The reports provide policy options and action strategies for each of the analyzed segments:

Contributions to the UNCAC review mechanism

On 16 June 2011, the Center for the Study of Democracy became a member of the UNCAC Coalition. CSD held a training on Strengthening Civil Society Capacity on the United Nations Convention against Corruption (UNCAC) and its Review Mechanism on 23 March 2011 in Sofia, Bulgaria. CSD annually provides information on its anti-corruption activities and its key findings in the majority of the areas monitored by the UNCAC review mechanism.