Transnational organized crime is fuelled by corruption. Criminal networks use bribes to facilitate the trafficking of people, drugs, endangered species and arms. In addition, environmental crimes such as illegal logging are often enabled through illicit payments to relevant officials in order to ensure their cooperation. 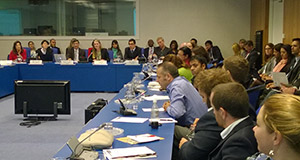 To illustrate these phenomena, four representatives of Non-Governmental Organizations (NGO) presented their points of view at a side event organised on 8 October 2014 by the UNODC Civil Society Team on the margins of the seventh session of the Conference of the Parties to the United Nations Convention against Transnational Organised Crime (CTOC/COP7) – “Addressing the Links between Corruption and Transnational Organised Crime”.

Representatives of NGOs, United Nations bodies and Member States delegates showed considerable interest in hearing the views of the NGO speakers, with over 70 participants attending the side event.

H.E. Susan Le Jeune D’Allegeershecque, Ambassador of the United Kingdom of Great Britain and Northern Ireland (UK) to the United Nations Office at Vienna moderated the side event. Ambassador D’Allegeershecque mentioned that the UK attached great importance to civil society participation in the work done by UNODC, including that against corruption and transnational organised crime. Also, the Ambassador recalled a speech recently made by Prime Minister David Cameron. Speaking at a side event on the margins of the 69 th session of the General Assembly, Prime Minister Cameron stated that the fight against corruption should be one of the sustainable development goals for the post-2015 agenda.

Mr. Joel Jabiles, Project Coordinator, Capital Humano y Social Alternativo – CHS Alternativo and member of the Global Alliance against Traffic in Women – GAATW presented research on the links between corruption and human trafficking in Peru. He showed how poverty, informal economy and increased demand for sexual and labour exploitation are reinforced by corruption. Through cross-referencing the results of the Transparency International Corruption Perceptions Index 2013 and those of the U.S.A. Trafficking in Persons Report 2013, evidence was presented on the nexus between corruption and human trafficking at global level.

The questions and answers session focused on the important role that education and media, in particular social media, can play in the fight against corruption and transnational organised crime.